The White Bear Lake Area Historical Society offers a wide variety of local history programs that can be adapted to any group large or small. Join us for one of our monthly presentations, or have us come to you for an on-site presentation.

To learn more about our programs or to schedule one for your group, please contact us: 651-407-5327 or office@whitebearhistory.org 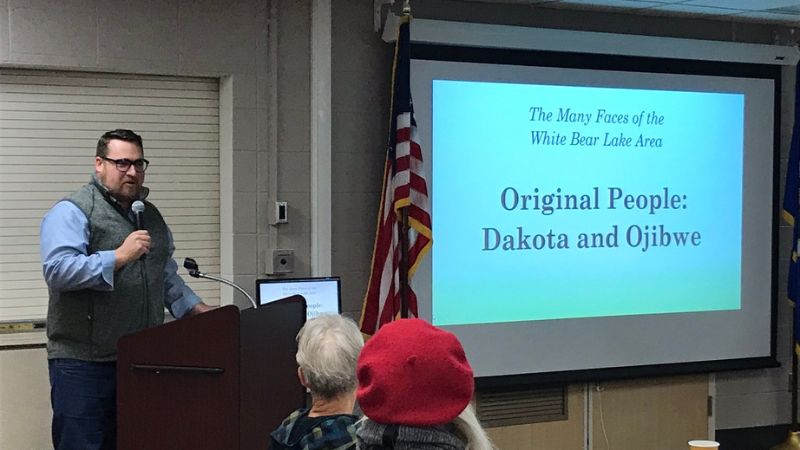 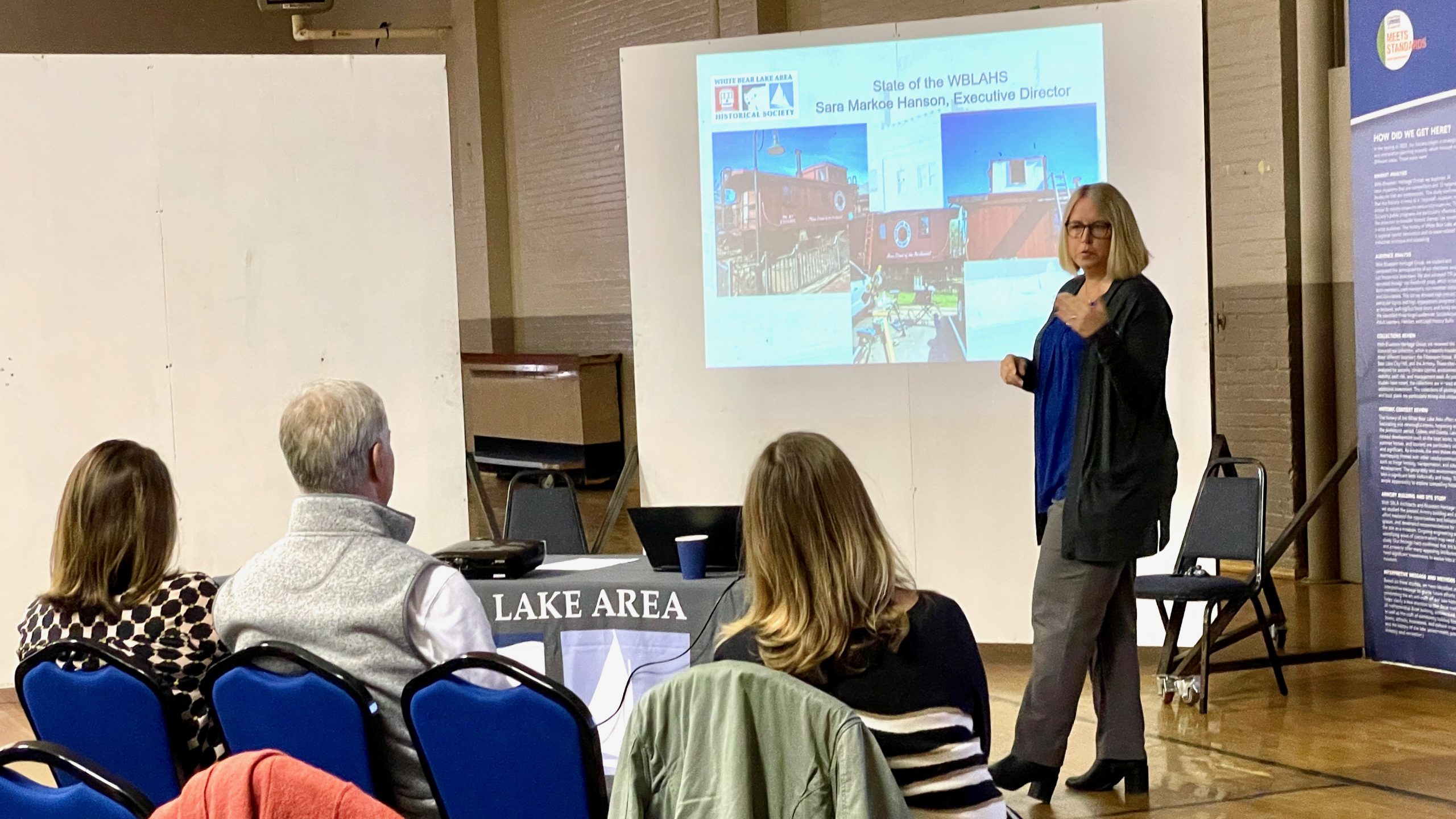 We will explore the many different types of resources that the White Bear Lake Area Historical Society preserves for our communities. Bald Eagle functions as a wonderful example of a community within a community that is on record through photos, ledgers, minutes and other documents.

Learn some tips and tricks to creating a family heritage scrapbook that can be ordered at an online retailer. Discussion includes a comparison of available websites and formats as well as design ideas and enhancements.

Helen Fillebrown devoted her life to music from the time she was a young woman studying her craft in Berlin to sharing her talents with piano students in her White Bear Lake home which became something of a musical Mecca. Join us to hear the story of her gift.

Hattie Long spent much of her career teaching at White Bear’s Washington School. As a pioneer of Special Education Hattie touched many lives. As a writer, an active geologist and a dedicated member of her church, Hattie had many sides people rarely saw. Join us to hear the story of this remarkable woman.

How Did The White Bear Town Hall Get Here

Learn the story of White Bear’s oldest municipal building through this illustrated program highlighting how the structure has evolved to meet the needs of its changing community and what the future has in store.

Recent research has uncovered more of the story of Arthur Fillebrown, the quieter of the two siblings who donated their lakeside cottage to the White Bear Lake Area Historical Society in the 1970s. Join us to hear his story illustrated through family photos and clippings.

Schools Around the Lake

The communities around White Bear Lake have a long history of quality education. Through an illustrated program we will explore the early days of education in the White Bear and Mahtomedi School Districts, the innovative buildings and programs as well as several notable and influential leaders such as early special education teacher, Hattie Long.

Throughout the decades the White Bear Area has been the place to relax and enjoy all that a Minnesota summer has to offer. The White Bear Lake Area Historical Society explores the recreational history of our community through illustrated stories of the Bald Eagle Water Club, Tally’s Dockside, Wildwood Amusement Park and much more.

The Story of the White Bear Armory

Join us to hear the story of the White Bear Armory building that has served our area in a variety of ways since it opened in 1922. From sending our soldiers off to World War II to local coronations and dances the armory has been at the heart of community for decades.

The Story of the White Bear Library

White Bear has had a library in some form since the 1880s. Explore the evolution from community reading room to county library as we embark upon a new era of the library system in our community.

The History of the White Bear Fire Department

Explore the buildings and scenes of downtown White Bear Lake that have changed and be surprised by so much that has remained the same! This illustrated program highlights many of White Bear’s popular businesses along Clark Avenue, Washington Avenue and a portion of Third Street.

Explore the buildings and scenes of downtown White Bear Lake that have changed and be surprised by so much that has remained the same! This illustrated program highlights many of White Bear’s popular businesses along Fourth Street, Banning Avenue and Third Street.

Where Exactly Was Wildwood Amusement Park?

Wildwood Park boomed on the southern shore of White Bear Lake during the first part of the twentieth century. Join us as we set the scene with images and stories from the park’s heyday. You can almost feel the streetcars rattling along the tracks!

White Bear and the Civil War

The “War Between the States” was felt across our young country and the White Bear area was no exception. Hear the tales of several veterans from our area and learn about our soldiers’ monument on Clark Avenue.

Hear the stories of life during the war both at home and on the front. Did rationing affect day-to-day life at home? Did we lose any boys in the fight? Join us to learn what it was like during this significant time in our history.

Look Magazine named White Bear Lake an “All-America” City for 1964 and a year of celebrations began. The summer of 1965 was filled with events and activities honoring area organizations and accomplishments. Join us to learn about what was being celebrated 50 years ago, what has changed and what has remained the same.

The community of White Bear Lake is known as the “Land of Lakes and Legends”. The lakes are obvious, but what are those many legends? Join us to hear more about the legends that make our area unique – some real and some more imaginative.

White Bear on the Go!

Join us to explore the many modes of transportation that made White Bear such a popular place to visit and stay including the railroad, street cars, bicycles, steamers on the lake and even a hot air balloon or two!

White Bear: What a Winter Wonderland!

Travel with us through time as we explore the ways White Bear has celebrated winter from ice palaces to fishing contests to hot air balloons.

Join us to hear the stories of more than 100 years of the White Bear Women’s Club and see how this organization has influenced life in our community through the decades.

Take a journey with the White Bear Lake Area Historical Society through the evolution of rail transportation in our community and the importance of White Bear to the railroads.

White Bear has produced hockey greats throughout the decades. Names such as Moose Goheen, Doc Romnes, Brian Bonin and Ryan Carter have been rostered on NHL teams over the years. Join us to hear how they got their start in White Bear and other local hockey trivia including the origins of the Hippodrome and the start of the Minnesota State High School Hockey Tournament.

From the Civil War to current service members our area has had a tradition of providing and supporting troops. Join us to learn about our many veterans and their contributions and sacrifices throughout the decades.

The White Bear area was a haven for the 1920s and ‘30s era gangsters. Join us to hear the tales of infamous visitors such as Ma Barker, Alvin “Creepy” Karpis and Baby Face Nelson.

The White Bear area was a haven for the 1920s and ‘30s era gangsters who wanted to get away from it all. Join us to learn some gangster lingo while you hear the tales of infamous visitors such as Ma Barker, Alvin “Creepy” Karpis and Baby Face Nelson. Program updated with stories shared by local
residents since the first edition was offered.

The arrival of the railroad also meant the beginning of White Bear’s Golden Resort Era. Through this illustrated program we will explore the grandest of the resorts and recreation sites around the lake.

Join us to hear the story of the Fillebrown House, its residents and its many uses, as well as how it came to be a community landmark.