The White Bear Town Hall was designed by a young Cass Gilbert who would go on to design the Minnesota State Capitol, the United States Supreme Court Building in Washington, D.C. and many other significant public and commercial buildings across the country.

From 1885 to 2011 this was the official meeting place of the three member Town Board.  Today, the building is undergoing a restoration to serve as an interpretive center for students to interact with the history of our area.

The Town of White Bear was formed on May 11, 1858 when Minnesota became a state. That original township was composed of thirty-six square acmiles and included today’s cities of Gem Lake, North Oaks, Vadnais Heights, and White Bear Lake. For nearly three decades the three-person town board met at various locations to conduct their business.  Since there was no historic downtown, business district, or town center to gather around, it was determined in early 1885 that a building designated for the purpose of their meeting hall was necessary and the residents of the town avidly supported this endeavor. By the end of that year, a structure was erected that has lasted more than 125 years where it has served its residents and connected them to their government, allowed them to conduct business and linked them to their past. Since 1885 all of these residents would have to conduct whatever business they had, be it variances, licenses or other items to come before the Town Board, at the White Bear Town Hall.

Evidence has been uncovered to connect Cass Gilbert to the project. The demographics of White Bear in the 1880s included a small number of year-round residents and an ever-growing population of summer visitors, including the wealthy and social elite of St. Paul. This was precisely the clientele Gilbert hoped to establish. By designing a structure at White Bear he was able to connect with this population. The November 1885 issue of the trade publication The Inland Architect and Builder states: “The architect Cass Gilbert reports;  preparing plans for a town hall, 26 x 40 feet; at White Bear Lake.” The design for the White Bear Town Hall is not extravagant. It has been described by historian Paul Clifford Larson as “the first step on Gilbert’s distinguished career of public building design”.

The White Bear Township Board, in partnership with the White Bear Lake  Area Historical Society, envisions the Town Hall as an important historical centerpiece for the greater community. Its space will be used to tell the story of White Bear Township, the history of the building and its function as a “town house” for meetings, elections, and township operations. It will once again be open to the public and an active meeting place. The facility, managed by WBLAHS, will be recognized as a historical site providing interpretive programs, professionally guided tours, exhibits, and many other educational presentations. 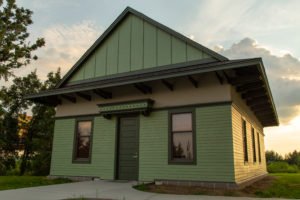